skip to main | skip to sidebar

Disease-modifying drugs can cost upwards of $30,000 a year out-of-pocket for people with multiple sclerosis. But Senator John D. Rockefeller IV (WV) is trying to help out.

On Aug. 7th, he introduced the Affordable Access to Prescription Medications Act of 2009. It seeks to cap monthly out-of-pocket expenses for prescription drugs at $200 per medication or $500 total for people on more than one therapy.

Amazing!
Posted by Danielle English at 4:23 PM No comments:

For the past week I have done my best to begin practicing meditation, but I have to admit i 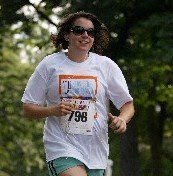 t has come harder than I imagined. In a comment, awb said that he and his wife just finished an aromatherapy regiment. Perhaps I could start there? I'm not giving up on meditation, simply attacking it from a different angle.

Last weekend I ran a 5K for the first time in my life. It was the longest I have ever run by more than a mile. It was great to feel accomplished at the end, but it took me nearly the rest of the week to walk normally again! This brings me to my second new goal in combating MS: get in better shape.

This weekend I began my slow build-up to being more fit. I played volleyball with friends at Wash Park and went for my second round of golf with my boyfriend. It was incredible, and much more manageable than I had imagined!

We all know that heat slows us down. But after I completed the 5K, I realized that heat doesn't have to completely stop me! A strange revelation, I know, but an important one for myself. Today I am beginning to train for Bike MS with a short workout on an indoor bike. Not much, I know, but I will be ready for next June. I will ride 150 miles.

Day 2: Train for Bike MS at least three times a week.
Posted by Danielle English at 12:05 PM No comments:

Danielle English
In 2002, I was diagnosed with MS at the age of 17. The disease and I finished high school together, earned a Bachelor's degree and we're working toward a master's. I have multiple sclerosis. But what does that mean in the age of Web 2.0? That's what I'm trying to figure out. Welcome to the Danielle English Mix.